Sothebys has just published the results of today’s auction [December 17, 2008, Sale L08411, London] of English Literature, History, Children’s Books and Illustrations, with a final take of 901,913 GBP!   Literature by the likes of Shakespeare, Byron, Milton, Dickens, and Beatrix Potter seems to be alive and well.  Here are a few of the results:

cut from his head after his death at Missolonghi, coiled and tied with a pink ribbon, with an accompanying wrapper inscribed in the hand of Byron’s intimate friend John Cam Hobhouse (“a lock of hair cut from the head of Lord Byron after his death by Dr Bruno”), and with a later envelope recording that the lock was later presented “by Miss Leigh to Miss Marianne Gidely”    3,000 GBP 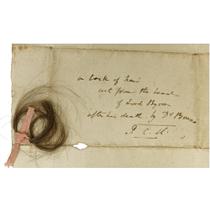 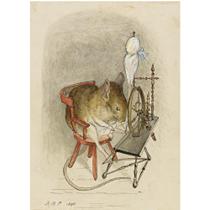 This is just a small sample…. there are works by Ian Fleming, Siegfried Sassoon, a Steinbeck photograph, George Eliot letters,  Kelmscott Press books, Milne, Sendak, other Potter illustrations, and much more…