This year marks the quadricentennial [400th!] celebration of Samuel de Champlain’s “founding” and naming of the Lake that bears his name.  2009 will see many festivities and exhibits about Lake Champlain at area art galleries, theaters, museums, and libraries ~ indeed they started on New Year’s Eve at the First Night in Burlington Vermont! ~ for more information on some of these scheduled events, please visit the

Lake Champlain figures prominently in the history of Vermont and the history of the early republic of young America during the Revolutionary War and the War of 1812.  It makes fascinating reading and there are many books on the subject.  I outline a few of them here, a small selection of what is available for purchase at my bookshop Bygone Books [please visit my website where you will find more information about each book]:

*Cone, Gertrude.  A Selective bibliography of publications on the Champlain Valley.  The New York-Vermont Interstate Commission on the Lake Champlain Basin, 1959.  $25. 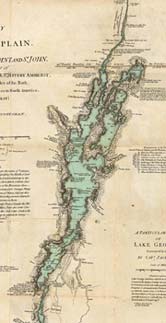 *Report of the New York-Vermont Interstate Commission on the Lake Champlain Basin.  State of Vermont, 1962.  $40.

A few links to other sites about Lake Champlain:

2 thoughts on “The Lake Champlain Quadricentennial”